Edit
Welcome to the Blood Bowl Legendary Edition Wiki
The wiki about Blood Bowl, the fantasy game that is a combination of a tactical and sports game. Set in the Warhammer Fantasy Battles setting, Blood Bowl parodies American Football, and is played by the twenty three unique races of this universe. that only those fanatics who love the game may edit. 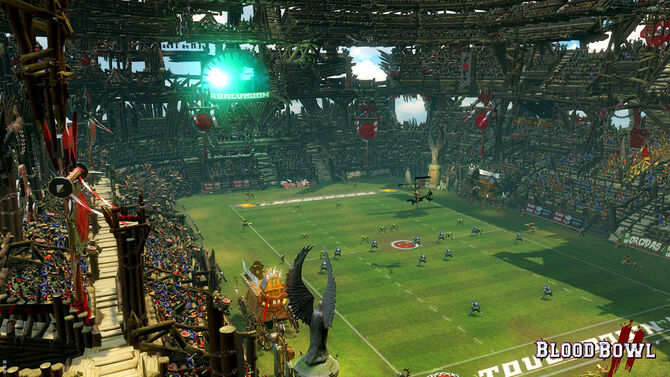 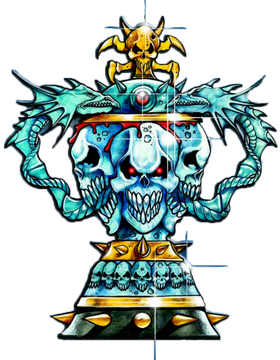 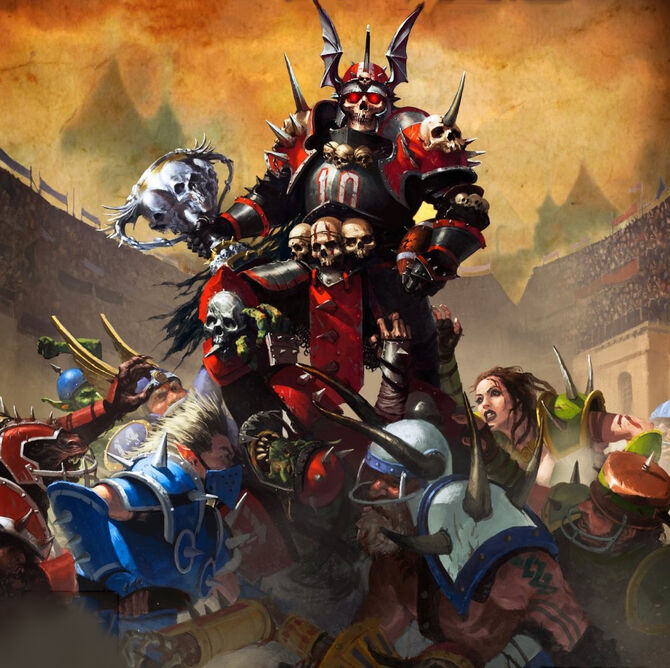 One of the many fantastic Blood Bowl stadiums

Blood Bowl teams fight it out for the ultimate achievement - the Bloodweiser Cup!

The many races that play the brutal sport of Blood Bowl

Come on down and play some Blood Bowl..let the blood lust consume your soul!

"Blood Bowl is an ultra violent team sport, based on the Warhammer fantasy world. Each region builds up their own team comprised of Orcs, Elves, Dwarfs and many other fantasy creatures before jumping into the bloodiest arenas! The basics are extremely simple: two teams, one ball. The team that carries the ball into the opponent's end zone scores a touchdown, the team with the most touchdowns at the end of the game is the winner. However, it’s how you decide to do this that makes things interesting, the ends justify the means! It’s not just the players you have at your disposal either. You can bribe the referee to look the other way as you cripple or trample annoying opponents and hire illegal wizards to give you a hand directly from the crowd… Blood Bowl severely tests the finest tacticians' strategies."

Blood Bowl is an ultra violent team sport, based on the Warhammer fantasy world. Build up your team with Orcs, Elves, Dwarfs and many other fantasy creatures before jumping into the bloodiest arenas! Blood Bowl was originally created by Jervis Johnson and Games Workshop in 1987. The board game, a parody of the Warhammer world and American Football, met with success in the 80s and the 90s. The world's largest Tabletop Wargames company continues to sell the game's miniatures today. Also, its creator never stopped improving and enriching Blood Bowl’s game system and universe with several rule changes. Today, Blood Bowl remains very popular around the world thanks to a large community of players and numerous dedicated fansites. As for old Blood Bowl players, they have unforgettable memories of all the passionate games they used to play. Throughout the years, the original Blood Bowl game has earned a legendary status. The Blood Bowl Legendary Edition Wiki is a collaborative project to create the most definitive, accurate, and accessible encyclopedia and reference for all official, canon-only information related to Blood Bowl. The database is organized in a Wiki structure, which allows an incredible level of interconnectedness and expansion. We started in June 2014 by Lead Administrator Algrim Whitefang and the database currently includes 24 articles. If you're new to the Blood Bowl Legendary Edition Wiki, please join us! Visit the Help page and learn how you can contribute to any article right now! However, if you are going to contribute, we ask that you do not create an article unless you intend to complete it and that you possess enough knowledge of the topic and English language skill to write an enjoyable, intelligible piece on your subject of interest. All articles contributed to the Blood Bowl Legendary Edition Wiki will be edited by an administrator for grammar, content and adherence to the Blood Bowl Legendary Edition Wiki's stylistic guidelines. Continue reading...

This web site is completely unofficial and in no way endorsed by Games Workshop Limited or Fantasy Flight Games.

Community content is available under CC-BY-SA unless otherwise noted.
Advertisement